I haven't built a rifle in about 6 years.  It’s amazing to me how fast this market changes.  Going through all my parts selection was a lot easier a few years ago.  When doing a build like this you want to make sure you’re not missing some new product that you would want later down the road, because mistakes are extremely pricey in this game.

I decided about a year ago I wanted to build my version of the ultimate hunting rifle.  I wanted to be able to kill anything in the lower 48 states with the focus obviously being on whitetail.  The first decision I made was bullet diameter, and I chose 7mm.

After that I started wading through the 7mm options.  I only shoot my reload's, so for me it came down to 3 front runners.

RUM fell off the list quickly.  I think it’s too much of an overbore, and efficiency would be out the window.  The STW, and Nosler was a much tougher decision.  I chose the 28 Nosler not necessarily for performance, because they are both neck and neck.  I chose it because it has a company like Nosler backing it, and they will not allow the caliber to fail by not producing brass.  If you look back at the last big caliber crazy (WSM/WSSM) the only reason they lost popularity IMO is brass availability.  This being a Nosler product I can’t see that happening.  Hell, you can still buy 6.5x47 Lapua brass for this reason, and not many people use that caliber.  Barrel consumption was not a huge worry for me on this rifle because it’s not a target rifle, if the barrel lasts me 1k rounds, that's a lot of dead critters over the course of a lot of years.  I intend to shoot the 162 grain ELDx's.  Keep in mind this is not a 1500 yard rifle build, in all reality, it may never take a shot north of 800 yards, so I don’t see the need to shoot the 195's, but by going 8 twist I can shoot the heavier options if I decide to.

I picked up a Pierce custom action, mainly because it’s one of the few I’ve never tried, and everyone raves about them.

On barrel selection I went with a Bartlien 8 twist, 3b contour.  I've used the Bartlien barrels in the past (as well as most everyone else) and they shoot as well as anything else.  I think in custom barrels everyone gets too wrapped up in "X brand vs Y brand", or "cut rifling vs button".  Fact of the matter is, I shoot a lot, and any of the top 5 manufacturer's barrels will out shoot me.  I will be cutting it off at 24 inches’, and threading it for a break/suppressor.

I have yet to decide on a break, but I have time.

On the stock, I've tried most, and always circle back to Manners.  Last stock I ordered from them the Elite hunter series was not an option, so a carbon stock for me and hunting is a huge win.  I wanted thumb hole, and folding.  Folding stocks are great for long trip's packing into country, and it won’t hurt me here in Indiana.  I personally prefer a thumb hole.  My perfect stock was not an option, so I went with the Manners EH5A.  It’s not a folder, but I had to choose 1 feature to give up, and folding lost.  I will have flush cup's, and Atlas rail added.  I’m going with the mini chassis for a couple reasons.  1) Life is a lot easier when you can bed with a torque wrench, and not devcon, marine tex, etc. 2) It saves me from having to order a detachable mag for the rifle.  Do I need a detachable mag for hunting?  Probably not.  Is life easier when you can put a 3-round mag in the rifle, and put a 5-10 round mag in the pack?  Absolutely.

On trigger, I will be ordering the Jewell HVR.  I put this trigger on my last build, and loved it.  If it ain’t broke don’t fix it on that part.  I'm very trigger picky.

For the work, I’ve always use AJ Brown.  Over the years we have built a good relationship, and to be honest he is one of the top builders in the country.  I see no reason to look elsewhere.

On optics, I have a meeting with Vortex in November and I'm going to push hard to get them to develop my idea of the perfect scope for this build.  Can’t get much more detailed than that, but if it happens I'm sure everyone will hear about it.

That’s it for now, I’ll keep you posted as I progress, and parts get put together.  Right now, all I have it an action, so there is no reason for pic's at this time. 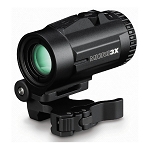